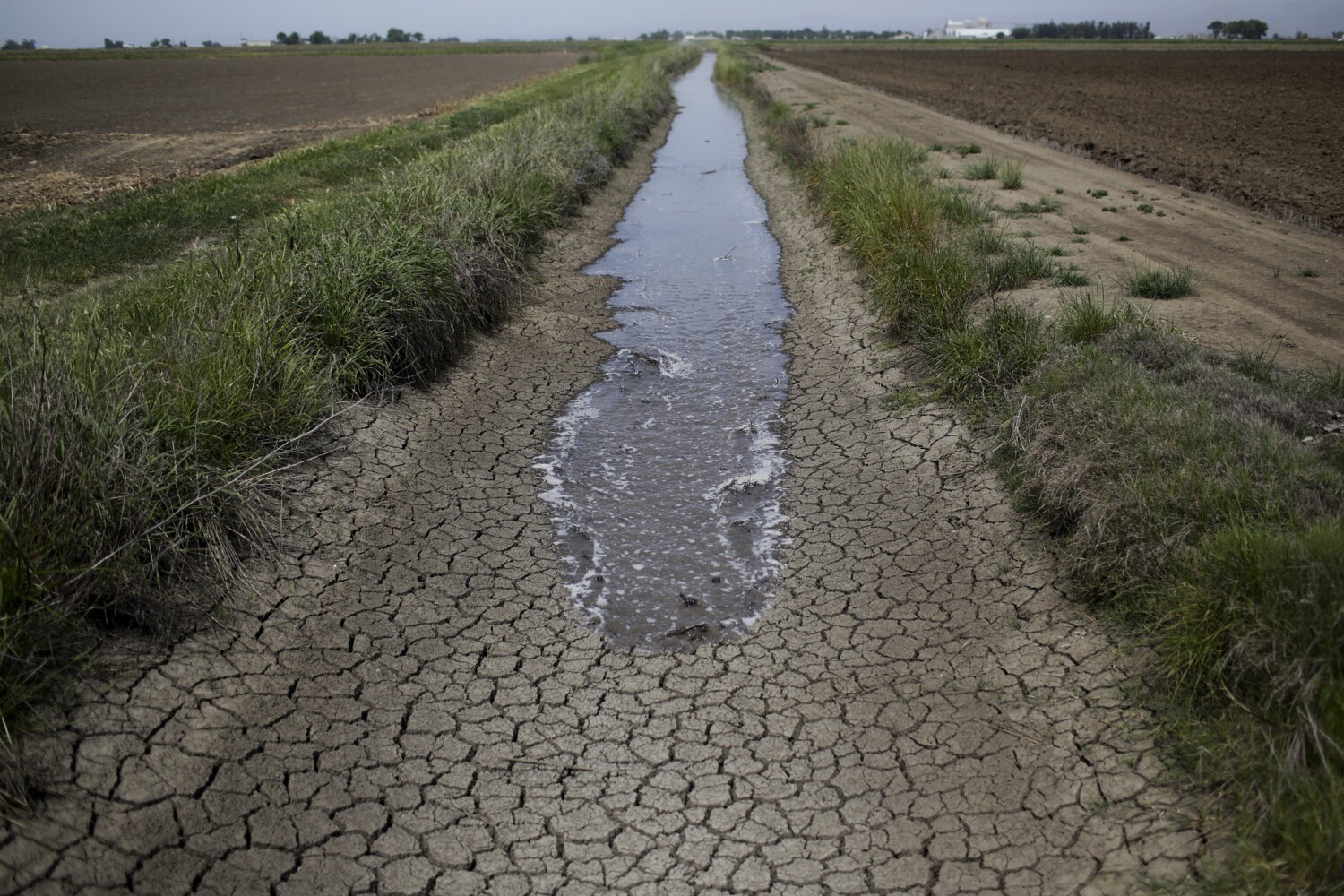 Wall Street’s reputation as one of America’s premier innovation machines can only be enhanced by a new futures contract that began trading publicly on Dec. 7. It allows investors to bet on the price of water in California.

Those who take the gamble are effectively betting that the spot price for water will rise during the life of the contract; they’ll pocket the difference. Sellers are betting that the price will fall.

People have tried to make money off the physical water market in California and lost their shirts. It’s a hard market to come into from the outside and take over.

The new commodities contract has inspired not a few projections of a “Mad Max” dystopia in which precious resources become the objects of violent tribal battles.

The United Nations raised a similar concern, through Pedro Arrojo-Agudo, its expert on water and human rights.

“I am very concerned that water is now being treated as gold, oil and other commodities that are traded on Wall Street futures markets,” Arrojo-Agudo said.

Let’s try to put this in perspective. The futures market that opened for trading on Dec. 7 isn’t a harbinger of savage bloodletting over dwindling water supplies.

In fact, there’s reason to question whether the market will work anywhere on Earth outside of California, where billions of dollars’ worth of agricultural production competes with burgeoning residential development, industrial demand and environmental needs for increasingly doubtful water supply.

“The hysteria is ill-founded,” says Lance Coogan, CEO of Veles Water, the London financial firm that created the investment index on which the futures contract is based and designed the contract, which is traded through the Chicago-based CME Group.

“This is doing good,” Coogan told me, explaining that the contract’s purpose is to give farmers and other major users a way to limit their exposure to price increases. “If you’re an almond farmer and you’ve been ravaged by three droughts over the last decade, to be able to hedge your price is something you want.”

Coogan is right, as far as that goes. But it’s proper to observe that the contract wouldn’t be needed except for the scarcity of water in the state’s agricultural zone and the prospects that supplies will only get tighter.

“The contract is justified as an attempt to address some very fundamental problems — namely the scarcity of fresh, clean water,” says Basav Sen, an expert on climate policy at the Institute for Policy Studies, a Washington think tank. “But it doesn’t address any of the root causes of scarcity, such as climate change, polluting practices whether fracking or wasteful industrial agriculture.”

“This is a stopgap at best,” he says. “It’s going to help for only a few years, if at all, and then no matter how much you can hedge against rising costs, the costs are going to keep rising. It just puts off the day of reckoning.”

Here’s what the market can do — and perhaps more important, not do.

That’s distinct from the terms of futures on gold, oil, wheat and other physical commodities, which can be settled by delivery of the underlying items.

“Water is a heavy commodity with a lot of restrictions on how it can be moved,” says Ellen Hanak, water policy expert at the Public Policy Institute of California. “People talk about water as ‘the new gold,’ but that’s just a metaphor.”

Rules on the movement of water are byzantine in California, where some water rights date back to the 19th century.

In regions of water abundance such as the East and Northeast, the dominant legal doctrine was based on riparian rights: Those with land adjacent to rivers had rights to the river water, as long as they didn’t interfere with the rights of downstream users. The rule served farmers growing crops along the riverbanks.

That didn’t work in arid and semi-arid regions such as California, where water users such as miners were located far from water sources. The dominant doctrine in the state became “prior appropriation” — those who first draw water from a source for any reason can continue using it indefinitely for the same purpose.

That right is limited, theoretically, by the state constitution, which requires that the water be used “reasonably” for a “beneficial use.” But those terms have never been defined or tested in court.

“There’s a legal question whether these water rights are property rights rather than use rights,” says Peter Gleick, co-founder and president emeritus of the Pacific Institute, a water policy organization.

“If you don’t use it can you sell it or market it,” rather than ceding it to the junior rights holder next in line?

“I’m not sure where the fight is going to end up between the existing water rights situation and those who want to turn it into a market,” Gleick says. In California at the moment, he says, “the water rights system doesn’t permit large scale trading.”

Some water trading does take place, involving about 1.5 million acre-feet a year, or about 4% of water use by cities and farms, according to estimates by the Public Policy Institute of California. (One acre-foot is the equivalent of 325,851 gallons, or enough water to serve one or two average California households for a year.)

Most trades take place among agricultural users and within counties or regions. The approval process is “fragmented and inconsistent,” PPIC says, often taking years.

The new water contract circumvents that complexity because it can only be settled in cash. On expiration day, money — but not water — flows from those who have made a loss on their contract to those showing a gain.

That can be useful for water users such as growers seeking to lock in a price for the water they’ll need in the future.

Here’s how it works: Growers who know they’ll need to buy water from senior rights holders, and expect a drought lasting into the growing season to drive up the price of water, may wish to lock in a current price — say, $500 an acre-foot. So they buy futures contracts at $500.

If the price of water rises to, say, $560, so will the value of their contracts. They sell the contracts for $560, and use their $60 gain to offset their water price, effectively reducing their water cost to $500.

The contract price is based on the Nasdaq Veles California Water Index, which is based in turn on sale and lease contracts in the state’s water markets. The index was introduced in October 2018, when it was priced at $371.11 per acre-foot. On Dec. 30, the last price-setting session of the year, it stood at $492.56.

Coogan says he expects trading activity in the futures contract to rise and fall with weather forecasts. “All eyes will be on precipitation over the next couple of months,” he says. “If there’s a lack of rain and snowpack, I expect to see a quite dramatic lift. If there’s a heavy rainfall, there won’t be hectic activity and I would imagine the price would come off.”

He says that although the contract is tailored for agricultural users, he has received expressions of interest from business users and even municipalities.

Coogan’s assurances notwithstanding, California history is rife with attempts to profit from the manipulation of water supplies. The most notable case may be that of the billionaire Bass brothers of Texas, who bought up thousands of acres of arable land in the Imperial Valley in the 1990s. Their evident intention was to fallow the land and sell its water rights to San Diego, which thirsted to use the water for its residents.

On paper, the arrangement looked like a massive windfall. As holders of farmland, the Bass brothers could purchase federally subsidized water for $12.50 an acre-foot, which they could sell to San Diego for $400. They expected $92 million in revenue in the first year alone.

But the deal was eventually blocked by the Metropolitan Water District and a public uproar. The brothers apparently ended with a profit by selling off their land, but nothing like what they expected.

Concerns about the effect that futures trading might have on price or supply resemble those heard in other commodity markets, chiefly from unhedged buyers and sellers of the commodity — farmers growing wheat or raising pigs complaining that faceless speculators are manipulating prices, for instance.

Water may not fit into this model because of the web of laws and regulations governing its usage. But the prospect of subjecting the precious resource to market trends can still be unnerving.

“Markets are a way of evening out supply and demand problems when you have shortages,” Gleick observes. “But markets are a problem for those who can’t participate in them. In water markets, that includes the environment and people who depend on water but aren’t buyers and sellers, like farmworkers. If a farmer decides not to grow a crop and sell their water, the farmworker is out of luck.”

As for investors who will be playing the other side of futures trades — necessary participants to keep the futures market, well, liquid, Hanak offers some words of warning.

“People have tried to make money off the physical water market in California and lost their shirts,” she says. “It’s a hard market to come into from the outside and take over.”

Postal Workers Are Dying In Heat Waves. It’s Only Going To Get Hotter.

Illustration: Hokyoung Kim for HuffPost When Peggy Frank returned to her mail route following three months of medical leave, Los Angeles was in the middle of a scorching heat wave. The 63-year-old letter carrier had slipped […]

Wouldn’t it be nice if Mike Love finally sold his Pebble Beach mansion? The Beach Boys co-founder, who’s been trying to shed the home since 2011, recently relisted the Tuscan-style estate for $7 million. Spanning […]

For Black Executives Like Pia Flanagan, The Fight For Racial Equity Is Personal

The corporate lawyer-turned-executive grew up in Beaumont, Texas, just a short drive from a town called Vidor — a former white supremacist stronghold known as a sundown town. “If you were Black, you knew not […]